For some reason my preschool-aged son is obsessed with skeletons this year {must be a boy thing!}. He even wanted to be one for Halloween. I thought it would be fun to do skeleton crafts with him and chose to make Spooky Glow-in-the-Dark Skeleton Handprints. Of course he loved it!!! 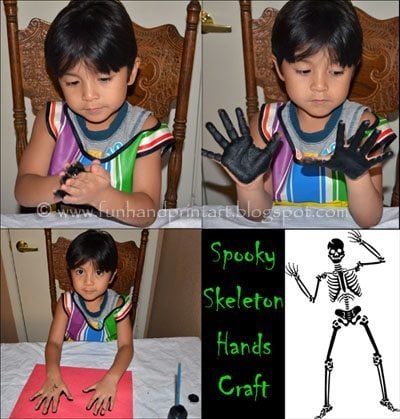 He painted his hands by placing decent-sized blobs of black paint in his hand and then proceeded to rub both his hands together until they were mostly covered. I took a paintbrush and got the edges that he missed. Next, he placed his hands on the piece of paper – this is always his favorite part as you can see by the photo! We set it aside to dry.

After the handprints were dry, I took Glow-in-the-dark fabric paint that I originally bought for some other projects and drew/painted on the bony skeleton parts of the hands. You can also find glow paint that is in the regular paint section as well {acrylic, tempura}. The kind we bought is light-activated so it just has to be placed under a light for a few minutes and then it will glow in the dark. Some paints only work under a blacklight. Underneath, I wrote “Happy Haunting!” 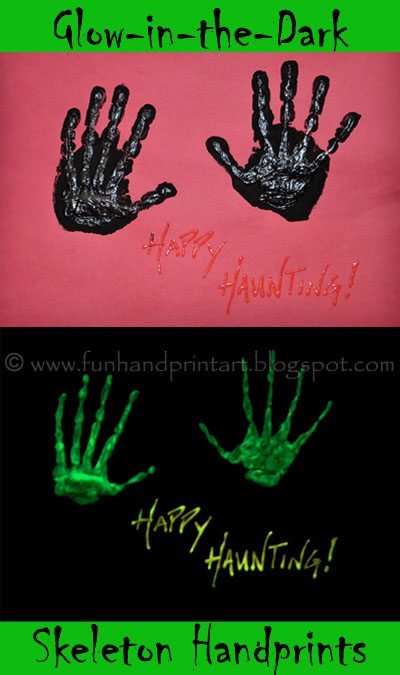 If I make this craft again, I would paint the skeleton/bones white first and then added the glow-in-the-dark paint when that dried. Then you could see it in daylight & at night. At the same time, it is kind of neat to have a fun surprise when the lights get turned off. I am sure his little friends would get a kick out of it when they come over to play in the evening!

This website uses cookies to improve your experience. We'll assume you're ok with this, but you can opt-out if you wish.Accept Reject Read More
Disclosure/Privacy/Cookies Policy

This website uses cookies to improve your experience while you navigate through the website. Out of these, the cookies that are categorized as necessary are stored on your browser as they are essential for the working of basic functionalities of the website. We also use third-party cookies that help us analyze and understand how you use this website. These cookies will be stored in your browser only with your consent. You also have the option to opt-out of these cookies. But opting out of some of these cookies may affect your browsing experience.
Necessary Always Enabled

Any cookies that may not be particularly necessary for the website to function and is used specifically to collect user personal data via analytics, ads, other embedded contents are termed as non-necessary cookies. It is mandatory to procure user consent prior to running these cookies on your website.