We made these Thumbprint Turkey Prayer Cards to read on Thanksgiving. I plan to laminate them so we can bring them out every year and eventually my son will be able to read them himself. 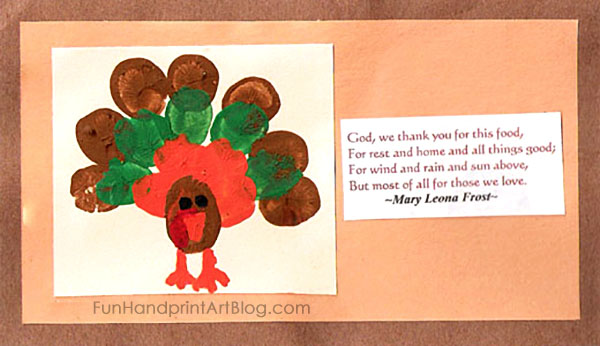 How to make the Thumbprint Turkey Prayer Cards

*As an Amazon associate I earn from qualifying purchases.

I made the turkeys using my son's thumbprints, but older children could make them using fingerprints instead.

Make a vertical thumbprint in the center overlapping the last row you made. Set aside to dry.

Draw or paint on the feet, eyes, beak, and wattle.

Make the turkey's body by making two stacked brown thumbprints with a third thumbprint on the top side (to create the head). Let dry.

Add on the eye, wattle, beak, and feet.

Print a couple of poems that are short enough for younger kids to read. Cut the poems out.

Cut around the turkey prints. Place these and the poems on a Fall colored small rectangle piece of cardstock

with glue. We chose to add another darker brown cardstock rectangle behind this.

to keep and use in future Thanksgivings. 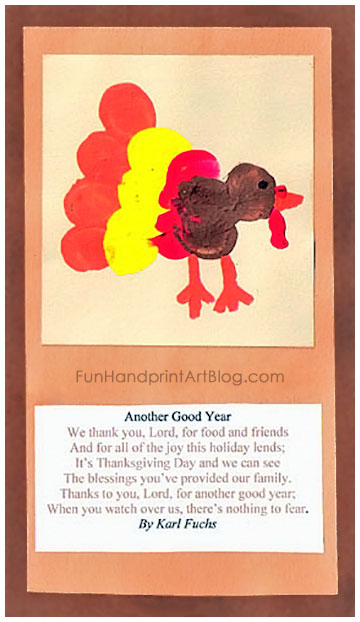 These thumbprint turkey prayers cards are a great way to incorporate a lesson in gratitude and being appreciative of things. Instead of printing a poem, have kids write their own prayer of thanks to read at the Thanksgiving dinner table or at bedtime.